Description and History – Although largely ruined and largely forgotten about Lynally was once a major ecclesiastical site and was founded by St Colman Elo in c590AD. The Saint is allegedly buried within the present enclosure and the site of the grave is marked by a flat medieval grave marker. There were also many early Christian grave-slabs discovered at the site which, according to the owner, were reluctantly given to the National Museum by his father in the 1960’s. Many other features were also taken to the National Museum although, according to certain local traditions were actually stolen in the dead of night and removed to the museum. I cannot verify this story in any way and it may just be local myth.

The present enclosure is located in pasture land South of the canal and South of the Clodiagh river. A crop mark around the present enclosure indicates that it was once much larger. The present remains consist of a badly ruined multi-period church with Romanesque features and 15th and 17th century features also. The church is 12m in length and 5m wide with the W end being the oldest. In the 17th century the church was extended E and the present and former E end of the church can still be made out. A two storey transept was also added with a barrel vault which is entered with a pointed door. Some fragments inside are nicely decorated and may have been original to the Romanesque church. The Archaeological Inventory of County Offaly states that the door is blocked up but this is no longer the case and it can now be easily entered. There are two crypts within the church that are slightly dangerous when trying to traverse the interior. Plans were made to fill these up with concrete some years ago but these were luckily blocked by the Offaly Historical Society. The owner also informed me that men from the Spanish Armada were buried there after some settled in the local area.

In all this is a fantastic site with great historical importance for the ecclesiastical history of Ireland but it is yet another victim of neglect. The official work that has been carried out has consisted of looting the site and propping it up with bits of wood. Fences have been put up to keep people out and as already said there have been plans to fill in areas with concrete. This is not conservation and will only further damage the site in the long run. The site is not far from collapse and without proper and professional conservation work this important site will be lost forever. I must commend the owner of the site who has researched its history and helped to stop some of the senseless “work” proposed. I would recommend visiting this site while you still can.

Difficulty – This site is easy to find and clearly visible from the road. The owner of the site was more than willing to let me spend as much time as I liked there and in his own words people “have a right” to see it. Do ask permission and thank the owner for his good work. 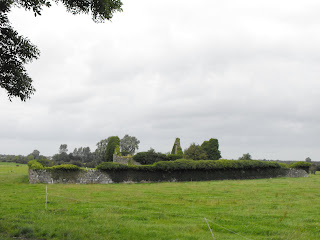 As seen from the road. 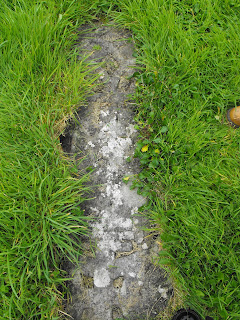 The grave of St Colman. 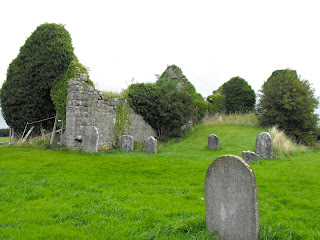 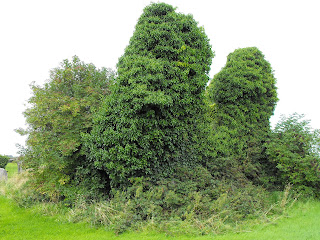 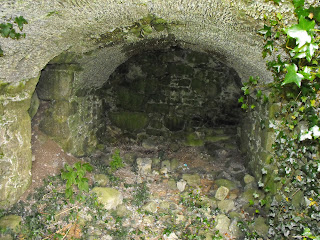 Inside the barrel vaulted transept. 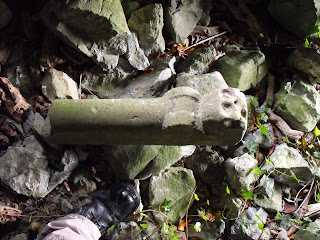 A piece of the few remaining decorated stones. 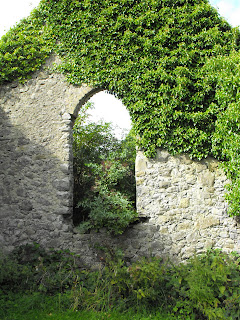 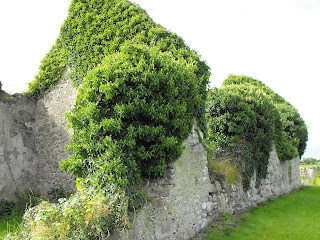 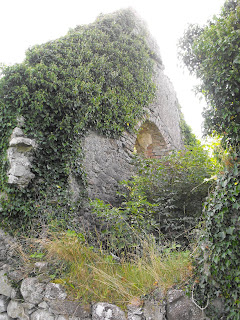 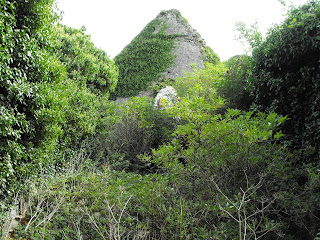 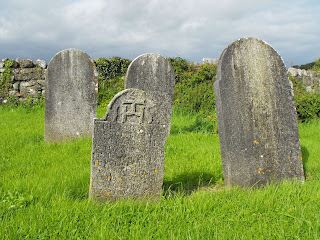 The graveyard contains some very old and interesting gravestones.