Barrel Vault - A simple stone vault used for roofing which is semi-circular in profile. 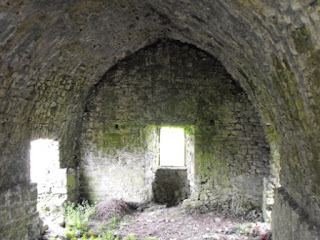 Barrow – Barrows are earthen constructions which can be divided into 6 types. The dating and function of barrows can be difficult and may range from the Neolithic to the late Iron Age. They are also sites that have been reused in different periods. Early barrows were often reused as motte and baileys and later as castle sites. The 6 main types are as follows:
Ring-barrow – Low circular mound surrounded by an inner fosse and outer bank.
Bowl-barrow – Steep sided, conical or flat topped mounds which can be surrounded by a fosse. Not all examples have banks.
Mound-barrow – Circular or oval shaped burial mounds with a gradual slope. This type is also known as tumuli and date to the bronze and iron age and often contain cist burials.
Stepped-barrow – Earthen mound with a berm around its base often with a bank and/or fosse.
Pond-barrow – Earthen mound with a concave interior below ground level. It is thought that they are related to burials.
Ditch-barrow – Slightly raised oval area defined by and bank and/or fosse. Some ditch-barrows may be destroyed ring-barrows. 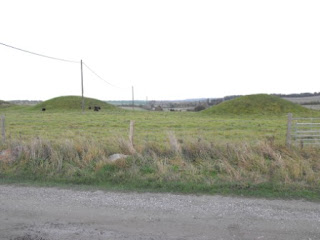 Two barrows with their ditches destroyed. 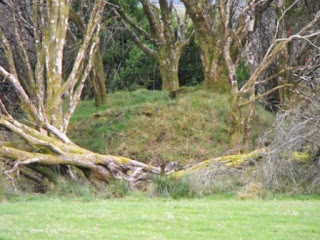 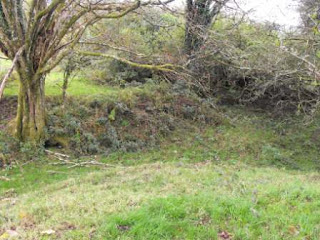 The bank and fosse of a ring barrow.

Bartizan – Associated with tower houses and fortified houses, bartizans are a floorless turret that are located high up on building and protect the corners of a building. 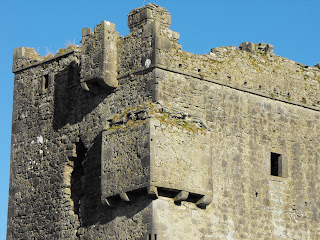 An example of a bartizan at a tower house.

Batter – The widening of the building at the base of a building, more often found on a tower house.

Battlements – Battlements are usually high up on buildings and are parapets divided into short lengths with frequent embrasures. Also known as crenallation.

Bawn - Wall around a fortified house or tower house, usually with gun-loops built in. 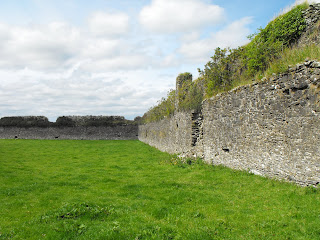 The bawn at Ballynakill tower house and fortified house. Note the wall walk and the gun-loops.

Beaker people - Bronze Age people of Britain named after their pottery remains. It is thought that they built the monuments of Stonehenge and Avebury in England. Their presence in Ireland is thought to have been small as no burials have been found, although pottery has. They may have introduced the idea of the standing stone to Ireland.

Beaker ware - Type of pot in beaker shape made by the Bronze Age beaker people.

Bellcote - Usually high up on the gable end of a church used for housing a bell.

Berm – Flat area between the bank and fosse of a barrow.

Bullaun stone – A bullaun stone is a stone in which a cup shaped hollow has been made either naturally or by hand. The stones are associated with religion and magic and the water collected within was thought to have the ability to cure ailments. These stones were common in the early centuries of Christianity in Ireland. 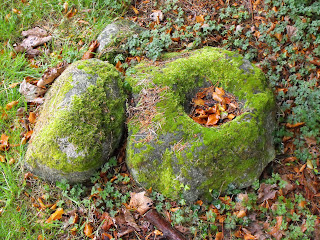 Stone with a singe cup shaped depression in it.
Buttress - Small wall that projects at right angles to a main wall of a building.  The purpose of a buttress is to support the main structure.