Description and History – Driving through the forest towards the castle you get the impression that you are in for something special.  The dark and dense forest creates an atmosphere that builds before you finally set eyes on the castle.  The castle is immense in size and is located in a small clearing of forest and therefore completely dominates you as you approach it.  After learning of the history of the castle you realise that this is exactly what it is meant to do – you are to feel intimidated by this huge castle.  The oversized tower that stretches into the sky puts me in mind of the Palazzo Vecchio that sits in the Piazza della Signoria in Florence.  The appearance of the castle harks back to the huge castles of the medieval period and certainly does not follow the conventions of the fortified houses that dot the countryside of Ireland which date to the same period.

The land was inherited by Charles William Bury in 1764 who was at the time only six months old.  Bury would be responsible for the present design of Tullamore as an accident involving a hot air balloon would burn most of the town to the ground during Bury’s twenty-first celebrations.  Upon being created Baron Tullamore in 1797 Bury began planning the construction of the castle which commenced the following year.  The castle took fourteen years to build and was finely built in the neo-Gothic style.  The castle consists of four corners circular towers of differing heights and a central square tower with adjacent stables.  The castle was designed by Francis Johnston who also designed the GPO in Dublin. The entrance to the castle on the inside is designed to look like a grand lodge of the Freemasons with whom the Bury’s were involved with.  Echoes of Freemasonry are built into the very design of the house with Masonic symbols used in the designing of rooms and decoration.  The house was also deliberately built on what the Bury’s believed to be ‘magnetic ley lines’ which are faults in the Earth that result in strong magnetic fields in certain areas.  Although ley lines are not scientifically recognised as existing there are still legends of the alleged power of these lines that in certain rooms metal objects that are hung from the centre of the room will spin in circles.  I, myself, do not believe this to happen as the chandeliers were quite static.  The castle was only occupied, on and off, for just a century as the family lived far beyond their means and often ran out of money.  This is not surprising considering the exquisite decoration and mouldings in some of the rooms and the richly carved doors.  As with most castles in Ireland this castle has its fair share of ghost stories and was even the subject of one episode of ‘Most Haunted’.  Stories of ghostly apparitions and phantom little girls add to the lore and atmosphere of this castle – and surely would have acted as a deterrent to any potential thieves during times of un-occupation.  The Bury family were also vehemently Unionist and even helped to suppress the 1798 rebellion and set up the Act of Union in 1801.  Their Unionist feelings are even represented in the shape of the garden which is designed in a Union Jack shape.  Over the past century there have been certain groups that have wanted to destroy the garden (and no doubt of the castle itself) because it represents the former power of the British Empire.  I feel that this would be a sad move as all our history, bad and good, needs to be preserved and remembered.

Finally I need to mention the people that run and preserve this castle today.  The castle is in the hands of the Charleville Castle Heritage Trust and not the OPW. The CCHT are doing a fantastic job in preserving this castle and carrying out any necessary repairs.  However, in the economic climate money is sparse so please do donate while you are there.  They are more than happy to accommodate visitors and will give tours.  It is great to see people taking such a huge interest in our heritage and donating so much time, money and effort to the preservation of it.  Sadly, most of the castles I go and visit are ruined and abandoned and left to collapse and will soon be gone forever.  We need more people like these in charge of our cultural heritage.

I intend to extend this article in the future after a second visit to the castle.  I have just learned of a series of underground tunnels beneath the castle that I would like to possible explore. I am also extremely unhappy with these photos and want to go back and get some better shots.

Difficulty – This site is easy to find is signposted from the N52.  I would advise making an appointment in advance as they quite often have functions there. 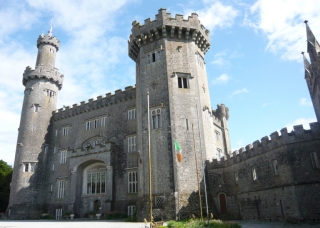 This image is not mine and comes from the Charleville Castle official website. My lens at the time was not good enough for such a wide shot. They were preparing for a festival while I was there so there was plenty of activity. This tower is something right out of a fairytale. There are sadly still derelict parts of the castle. One of the many richly carved doors. Inside the main entrance. There are many ornate chandeliers here...sorry about the blur in this shot. Large staircase and reportedly one of the most haunted places in the castle.