Tenon - In stone or wood, a projecting piece that fits into a socket, also called a mortise.

Tower House - Built between the 14th and 17th centuries, the tower house is a fortified dwelling, square in plan and up to 5 storeys high. Highly defended buildings they were hard to defend and eventually gave way to fortified houses. 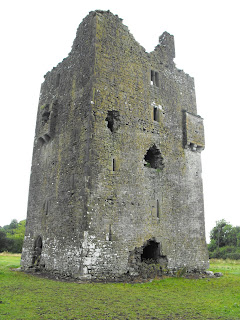 Transept - The portion of a church that forms the cross shape.  The transepts of a church will be usually aligned N-S as opposed to the chancel and the nave which will have a E-W alignment.

Transom – A horizontal bar of wood or stone across a window and entrance.

Tracery – The ornamental work in the upper part of a window.

Turrett – A small circular tower that is used mainly for defence.  They are often found at castle sites and rarely at ecclesiastical sites.