Description and History – This castle is really one of the best I have ever been to.  It is simply fantastic and one of the places that I receive the most emails about.  It is huge and dominates the surrounding landscape.  You could really spend house here.  It is situated between the railway line and the river Suir. Although the building looks like one huge castle it is actually a 15th century tower house to which a 17th century fortified house has been built on to which makes it look like an H plan house.  The house was the seat of the Purcell and Butler families and home of the Barony of Loughmoe. The Purcells were an Anglo-Irish family who originally arrived in Ireland during the Norman invasion in the 12th century.  The presence of the Butlers was because of inter-marriage between the two families.  The Purcells sided with James II during the Williamite War and Nicholas Purcell fought in the battles of the Boyle and Aughrim and signed the Treaty of Limerick.  He did not flee Ireland with the other “Wild Geese” following the end of the war and chose to remain in Ireland to fight for Catholic rights.

The 17th century portion of the house is completely gutted.  The newer tower portion is 5 storeys high while the central portion of the house is 4 storeys high with a semi-basement.  The basement floor is now missing but the level of the floor can still be made out.  The tower house is much modified to be in keeping with the later 17th century portion but can be clearly identified with its rounded corners, gun loops and machicolations.  Unlike its corresponding tower it is 4 storeys high, although the semi-basement is also missing.  The third floor (now second) contains an elaborate fireplace containing coats of arms and initials of former residents.  Side chambers are easily accessible.  The fourth floor (now third) was the former attic but the wooden roof is now missing.  A huge chunk of the wall now lies in the middle of the floor and it is overgrown.  There is a hidden prison chamber on the top floor but I wouldn't recommend going in there. You have to drop down from above and there's no guarantee that you would get back out again...especially on your own.

Difficulty – Access is through a farmyard and as always it is better to ask (if you can find the owner), but I have read that the farmer is use to and welcomes visitors to the castle.  A short walk from the farm yard brings you to the castle which is situated on well drained land.  The interior of the castle is uneven due to rubble and weeds.  An attempt has been made to block up the stairwell but this has been knocked over.  The upper floors appear to be safe, but I am no structural engineer. The fallen portion of the wall onto the upper floor may have weakened the floor but it appeared to be sturdy (although there were a couple of hollow sounding bits).  Be careful on the stairs – they are dark and narrow with much debris making climbing difficult, especially for those who have big feet like me. As viewed from the nearby grave-yard. This is the original tower house portion of the castle. Inside the gutted fortified house. There are some interesting designs on some of the doors. It is an absolute miracle that this fireplace has survived.  It is really beautiful. Detail of the fireplace with the initials 'FP'. On the top floor. I suspect that the fallen masonry has severely weakened the floor below and that it may not be far from collapse. The floor has a distinct hollow sound when walking across it. I would recommend caution while on that level. You can see hear that the windows were blocked up prior to the collapse of the floors in the fortified house section. There is no way to access these windows now. 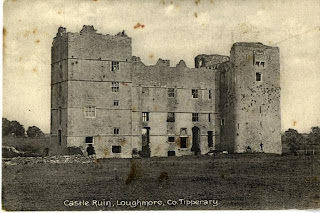