Gable end - The triangular portion of wall which holds up a sloping roof. 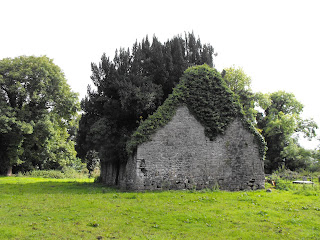 Gable end of a church at Rathurles in Co. Tipperary.

Gallery – A gallery is the collective name of the chambers in a court and wedge tomb.  They are known as galleries because together the chambers are long and narrow.


Garderobe - A toilet found in a castle. Usually a stone seat with drop behind leading to an exit on the exterior of the castle. They are sometimes disguised externally as machicolations.

Gate House - An outhouse in a castle bawn through which people seeking to enter the castle would have to pass. 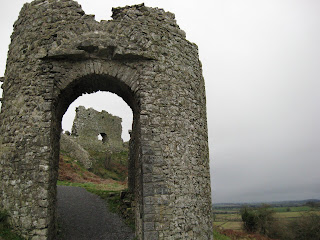 Gate house at the Rock of Dunamase in Co. Laois.

Gothic – Style of architecture that evolved from the Romanesque style in the 12th century and lasted until the 16th century. Gothic architecture is defined by its pointed archways which support the weight of the building more efficiently than the Romanesque rounded arch. 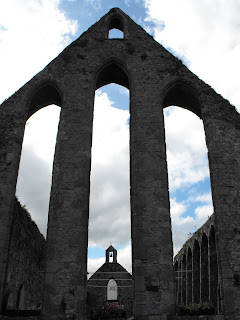 Note the pointed arches which are the defining feature of Gothic architecture.  Nenagh Friary, Co. Tipperary.

Grave slabs – Grave marker made of a flat piece of stone and usually laying down.

Groin vault - A type of vaulted ceiling named because of the sharp rib like angles caused by two barrel vaults intersecting.

Gun-loops - Slits in bawns through with guns were fired during an attack.  Also found in castle walls. 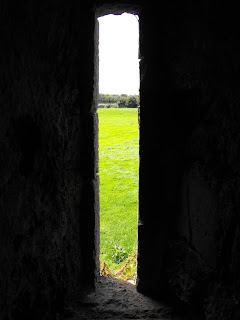 Looking out of a gun-loop at Loughmoe Castle in Co. Tipperary.

Gun turret – Small turret shaped building, often with a conical roof used for defence with a gun placed inside. 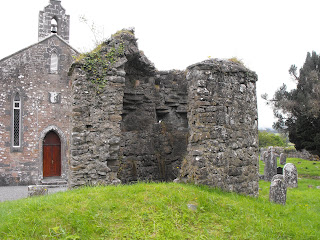