Description and History – The 12th century St. Patrick’s Cross is on display in the under-croft of the Hall of the Vicar’s Choral. A replica sits where it was once was between the Hall of the Vicar’s Choral and St. Patrick’s Cathedral. In the chronology of Irish high crosses, it comes late and is part of a group known as crucifix crosses – crosses dominated by large Christ figures, and often a cleric as well. The inclusion of clerics on these crosses likely reflects the church reforms of the 12th century, which saw the organisational structure of the church become more clearly defined.

St. Patrick’s Cross is unusual in that it is not a typical Celtic cross with its distinctive ring around the intersections of the shaft and transom – rather it is a Latin style cross. What has often been interpreted as a vertical stone support connects the arm to the base of the cross. There is a compelling argument that this is not a support at all but, when complete, these ‘supports’ actually formed a frame around the Christ figure that was inspired by examples found in illuminated manuscripts and metalwork. Therefore, the ‘supports’ are artistic in nature and serve no structural purpose.

Jesus is carved in high relief in a full ankle length robe, marking a departure from the more typical loincloth. St. Patrick is carved on the east face of the cross, his head missing and standing on an ox-head. The base, although weathered, is highly decorated with interlacing animals, and possibly a labyrinth with a minotaur at its centre on the north side. Interestingly, there is a small rectangular hole in one of the upper limbs of the cross which could have allowed for attachments to the cross in the form of angelic figures or evangelist symbols.

The cross is now extremely weathered and the Christ figure, while visible, lacks detail. There is a rectangular shape on Christ’s chest, which could possibly be a representation of a book or book shrine, held around the neck by a strap, in a fashion similar to pilgrims.

When considering St. Patrick’s Cross it is important to consider its influences. The depiction of Christ is less biblically inspired, but indebted to European artistic trends of the early 12th century. A sculpture from Lucca in Italy appears to be its main influence – this sculpture was supposedly carved by Nicodemus. The cross became famous across Europe at the time and copies found their way across the entire continent. Noted earlier, the possible labyrinth and minotaur becomes more likely when it is considered that the only other known labyrinth and minotaur in medieval Christian art was also found in Lucca.

The full-length depiction of Christ is at odds with earlier Irish high crosses, where he is often relatively small in size. Gone are the biblical scenes of earlier high crosses – the emphasis now on the crucifixion and church authority. Jesus is not portrayed as the suffering Christ, but rather as the triumphant Christ, victorious in death. The portrayal of Jesus on St. Patrick’s Cross is reminiscent of Dysert O’Dea, the Tuam Cross, and the Market Cross at Glendalough.

St. Patrick’s Cross may have also influenced later Irish depictions of the crucifixion. A 14th century shrine known as Fiacal Phádraig (St. Patrick’s Tooth) from Killaspugbrone, Co. Sligo, shows some similarities to Cashel. It was commissioned by William DeBermingham, Lord of Athenry, around 1376, to house St. Patrick’s tooth which was alleged to have fallen out at Killaspugbrone. The cross depicted on this shrine is similar to St. Patrick’s Cross in that is has the distinctive lateral supports (or borders). While the figure of Christ is significantly different, the inclusion of a similar looking cross, and the connection to St. Patrick makes a connection between the two possible.

For more on the cross, and other depictions of the crucifixion at the Rock of Cashel click here for my article in Heritage Ireland Magazine.

Difficulty – The replica is highly visible on site. The original remains inaccessible at present.

Back to the Rock of Cashel menu. 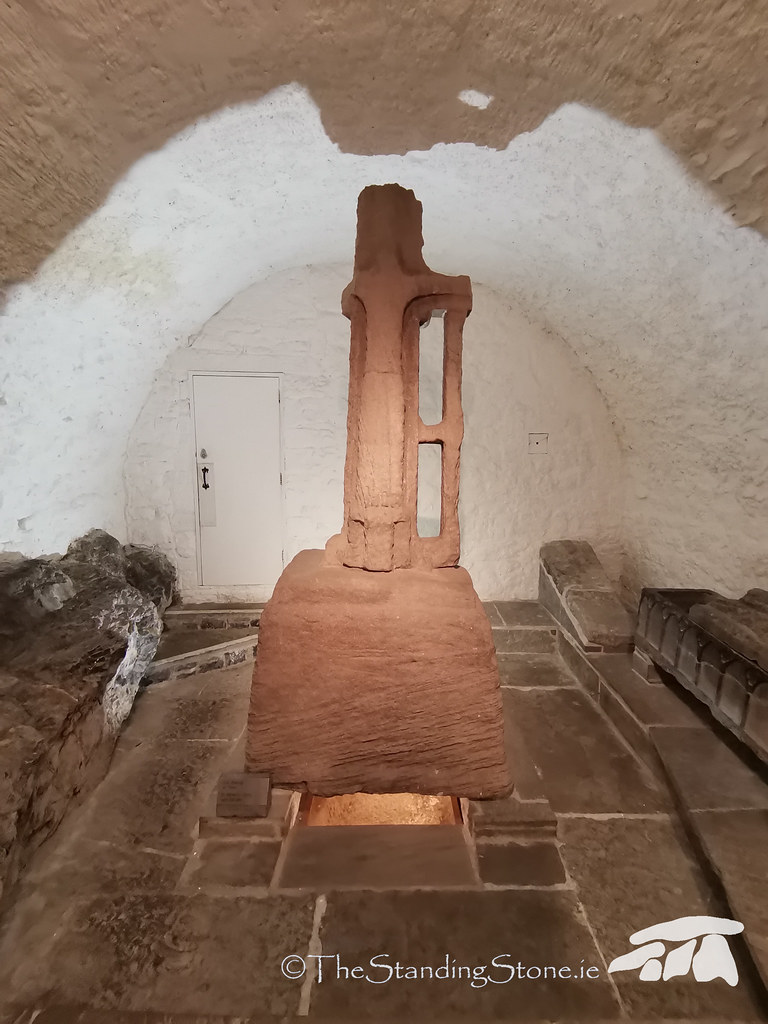 The original cross, located in the undercroft of the Hall of the Vicar's Choral. 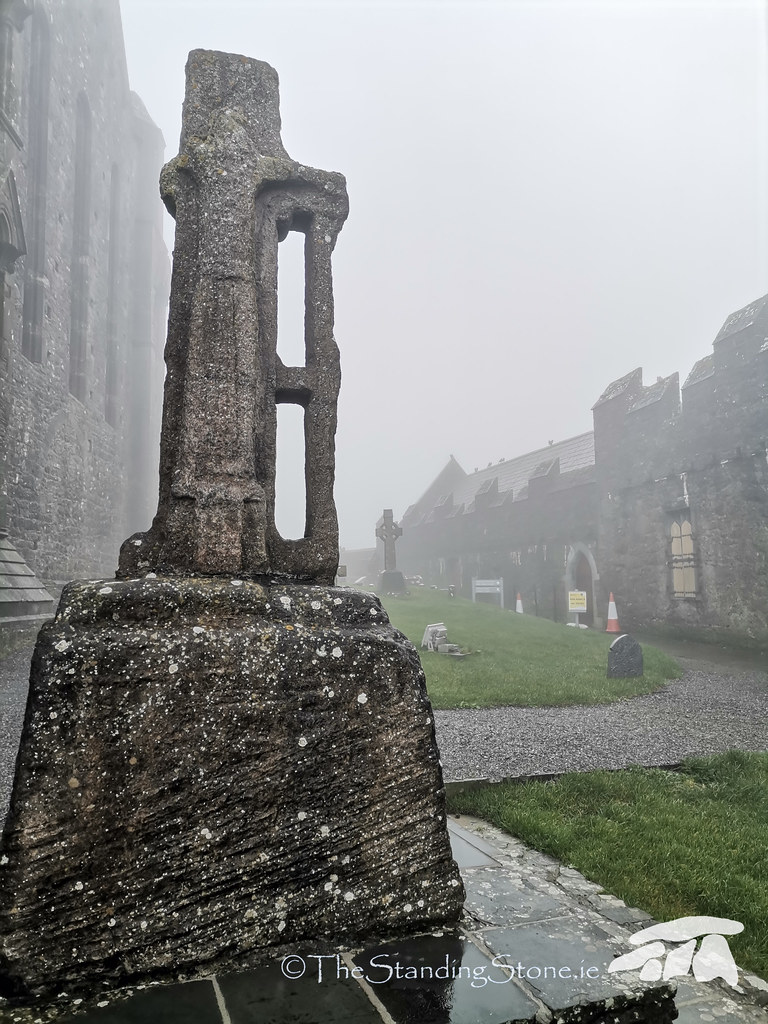 The replica. This side shows the crucifixion. 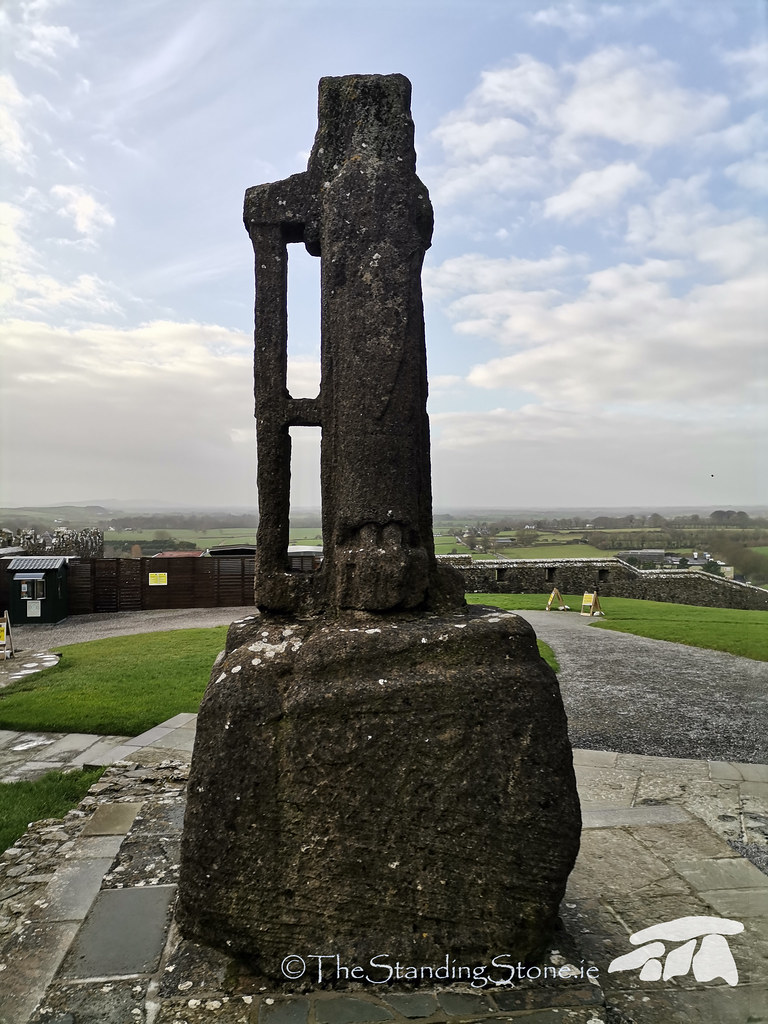 This side shows a cleric, possibly St. Patrick. 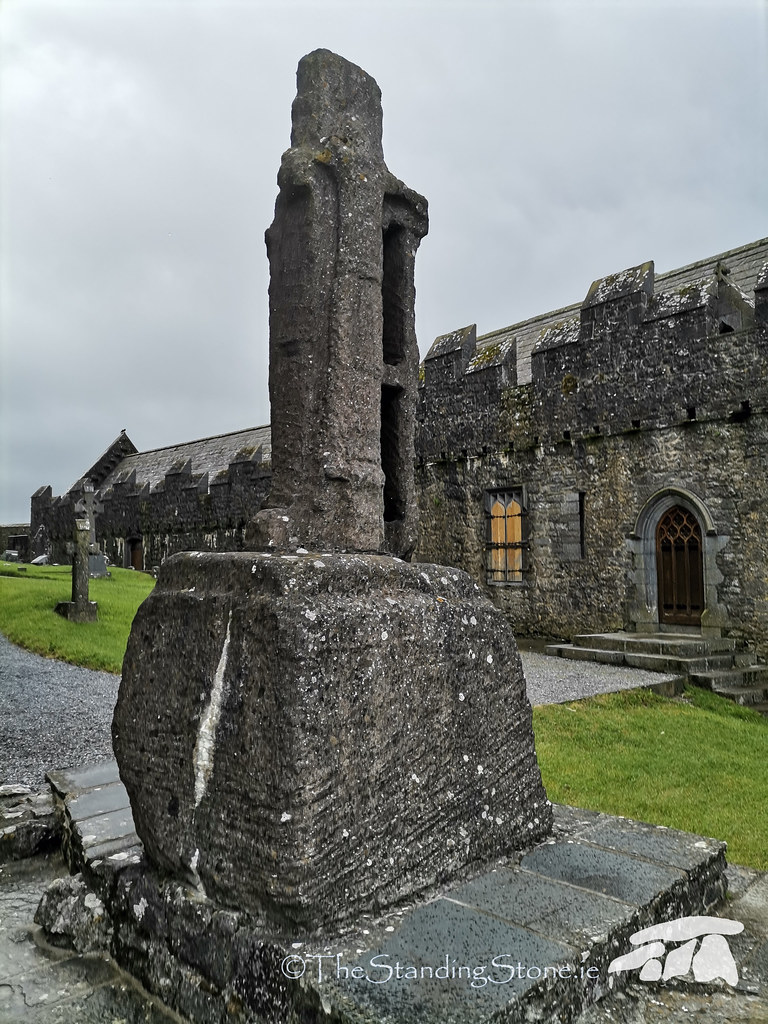 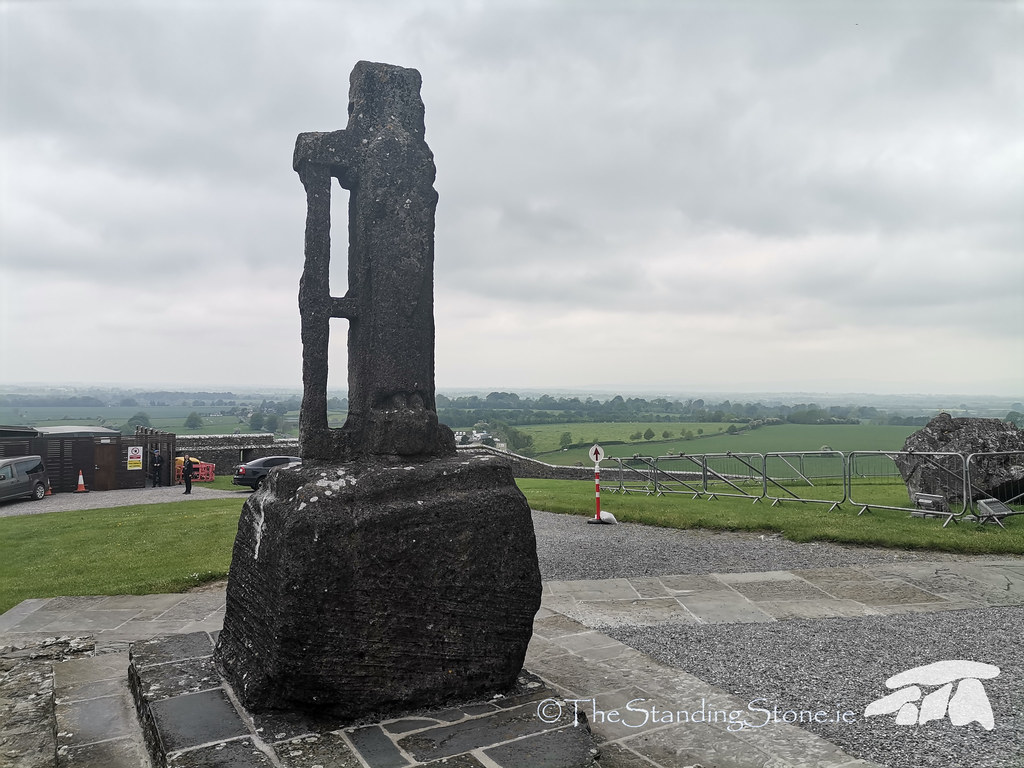 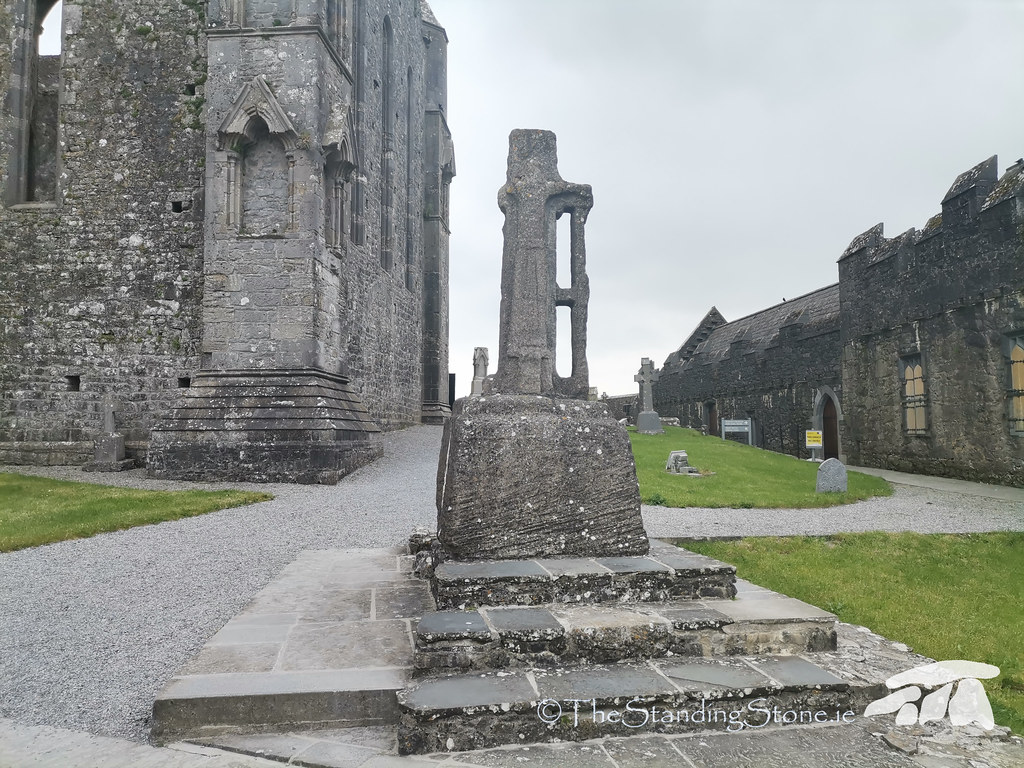 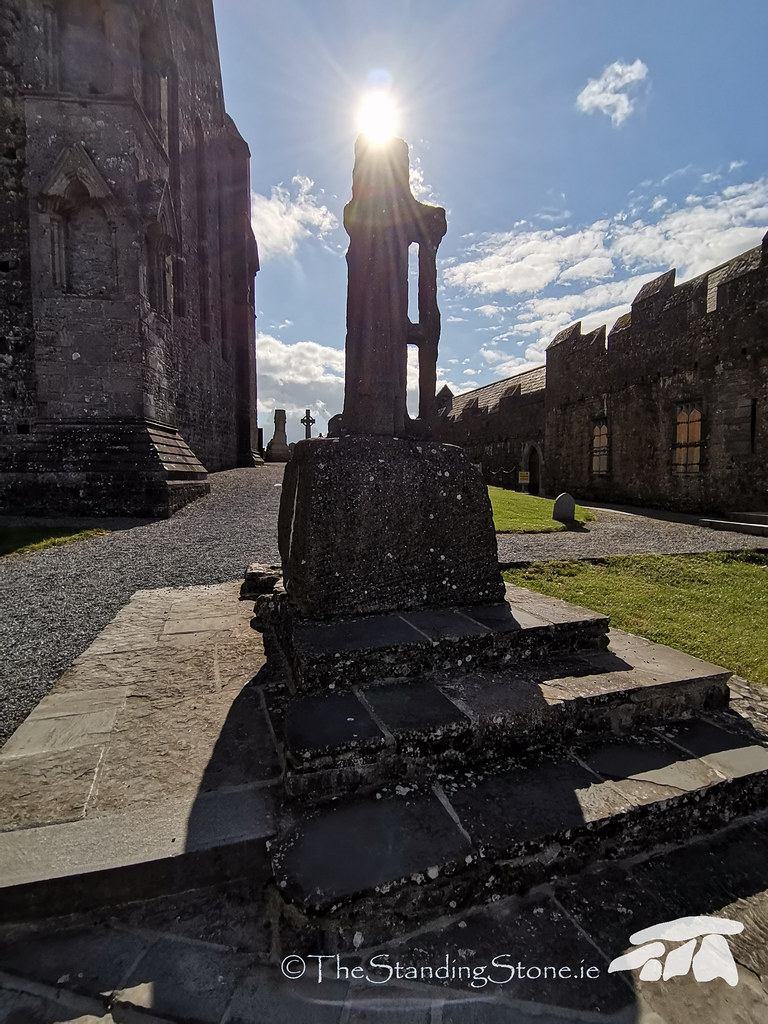 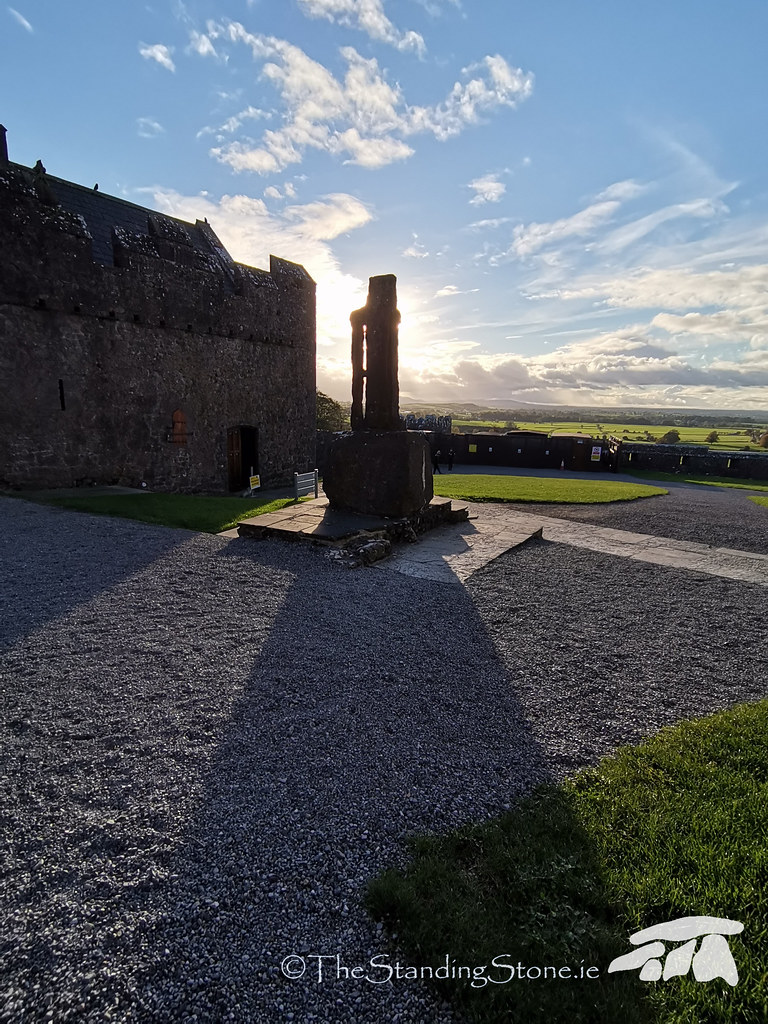