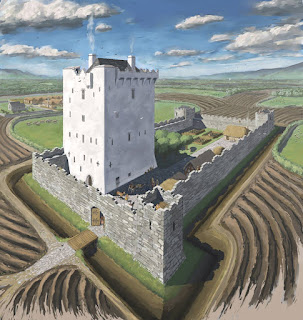 The final complete illustration of the tower house.

Research is the first port of call for every archaeological illustration, in other types of illustration it can play a part but in archaeological illustration starts and ends with research. You go to research for ideas, once you have the idea, you still go to research to fill it out, and once complete, you go once more to make sure it as right as you can make it and sometimes to write about it after, in other words, research is always there. I try to do my own research rather rely on summarising texts, as I believe the only way to make an original interpretation is to have a firm knowledge base in which to work from. In other words, I probably go the long way round, but I think (or hope) the knowledge I gain is more permanent because of it.

There are two kinds of research when doing post-prehistoric imagery, that is history & archaeology, the latter is better for filling out what should be physically there in an image; the look of the architecture, how it was roofed, were the walls painted etc. The former, is more useful for figuring what kind of rituals and/or daily activities that may have taken place there, whom could have been there, what they could have been doing etc. For this illustration, I had read 3 books on castles alone before I tackled it as I knew it was a huge and serious subject, previous to that I also read several books on medieval Ireland in order to fill out the world around it. 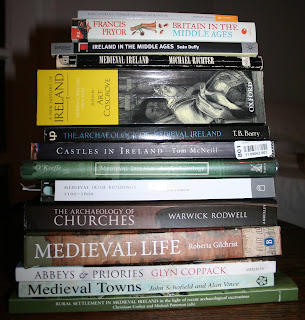 Some of the books I have read or am reading on the later middle ages for illustrations, many more articles and books in pdf format were read too.

To give specifics of where research helped in the making of the image (besides the obvious major architectural forms); the stepped battlements are from the later middle ages and the ones in the illustration are specifically Irish, each window and how it was used with some for bow, others for crossbows, and others still for guns. Staying with windows, mullioned and transomed windows were actually quite late as was the addition of chimney chute fireplaces in tower houses, earlier ones were heated by a central fire. It was also found that the usual for a castle was two chimneys as well as two latrines (one public, one private) as well as having an interior that starts with a straight mural stairs to the 1st floor, from there to the top floor they usually have spiral stairs and then another set of stairs leads to the wall walk area. It wasn’t just the castle itself that research helped to form, also the world around it, like how often tower houses were not too far from a parish church and probably some nucleated settlement, as well as the kind of field systems that would surround it, arable as well as pasture farming. As you can imagine this is only really touching the surface, it would take a long time to go into everything!

Before I finish up on this section, I should say one negative thing about research. While it’s obvious as to the benefits of research, it is actually one of the biggest pitfalls too in this field, as too often you get so tied up in the research, you spend too long studying and researching. As everything is important and all needs to be known, you have to set limits, otherwise no art gets done. This can also lead to one spending less time making art, which can be a weakness, because if you don’t spend enough time figuring out not just how, let's say, thatch should look like to be accurate but also serve visual purposes, not just being visually pleasing but also leading the eye and creating rhythmic shapes and lines (I know it sounds very arty but these things matter when making an interesting image!). In other words, if your research overweighs your artwork, then you have failed as an artist but without research the artwork is essentially make believe, even if it's pretty make believe. So like all things in life, it's a balancing act! 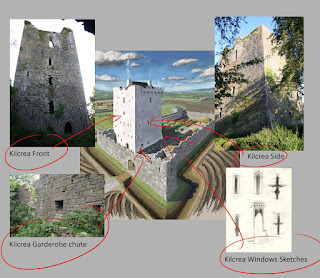 It’s not just literary research ones needs to do though, also you need to do visual research, which can entail visiting places, taking photos, looking at old illustrations etc. this part of the artwork is usually referred to as 'referencing' in art circles. Thankfully because of Sceitse (a sketch group I run) I have visited many, many tower houses over the years (and sketched them) so I have no shortage of direct tower house references. At the same time I often visit these kinds of places on my own if they are near a place that I’m travelling to or when the fancy comes to me. But while there are many fine examples, the one which I preferred the most was Kilcrea castle, a field away from the more famous friary with the same name.

I didn’t chose Kilcrea just because of its how intact it is but also how it has many of the typical features of tower houses. I have visited Kilcrea three times, once just to see it, second time because I knew I was going to try and remake it, and third time with Sceitse just for fun (and to collect bits I had missed in the first two runs). One of the best aspects of the work I do is I get to spend a day in a place like this, really really getting to know it, inside and out. One gets great enjoyment from hanging out in ruins, trying to re-imagine them and then going home doing just that. The tower house itself in the image is nearly entirely based off Kilcrea, both internally (coming soon!) and externally. The idea of the image was to make a tower house that represented tower houses as a whole (or at least a representational amount), which Kilcrea fit the bill well, it was modest in size and grandeur, middle of the road but it didn’t have everything, like a second chimney, and its wall walk battlements were completely gone, so I made some minor alterations to make sure it more representative of tower houses. 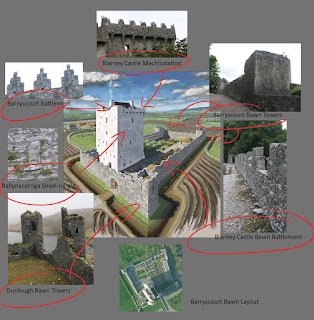 Besides Kilcrea, I made a few other additions, majorly in the wall walk area (the top), as I just mentioned, most of that was gone from Kilcrea and it is usually there that tower houses had most of their bling. From Blarney Castle, I got the Irish form of Machicolation(an extended battlement from the wall walk with slot holes which allowed defenders to drop stuff on attackers) and also from Blarney the Bawn battlements shown in the illustration. Most of the Bawn walls design though is from Barryscourt castle, including the slight Batter at the bases of the towers (an extension at the base of towers and walls to defend against battering rams, may also have been to give structures better support) and the Irish form of Battlement on the tower house is also from Barryscourt. Finally, Ballynacarriga castle’s Sheela-na-gig is on the wall and Dunlough castle’s bawn tower also influenced one of the towers. 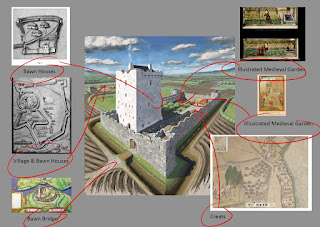 While site visits are paramount, another great reference is actual reference from the time. These have their pitfalls too, as the artists at the time could have been just winging it at times or biased or had an agenda of their own but they are the best evidence for the physical look for aspects that don't survive archaeologically

The images on the left of the image I believe are from Barlett’s Map, these were early English Maps from the early 17th century, they mostly helped design the cob walled houses in the image. I even used this map for reference of the bridge, such things rarely survive archaeologically. The bottom right is a 17th century map of Carrigfergus, note the Creats, a type of late medieval Irish circular/oval house of just thatch and wattle, you can’t see it well in the image but there is one in the bawn of my illustrated tower house the last house in the yard before the horizontally situated bawn house. Not just Irish illustration evidence was used though, the right top two were examples of gardens from other European countries Medieval manuscripts.

So that sums up two of the processes which go to creating an illustration, as you can see a lot of leg work is required both in researching and referencing a site like this. One has to research constantly to stay in tune or even get a good grounding of the different periods, I’m sure I’ll never really stop, as there is always one more castle to see, one more book to read, one more image to make.

JG O’Donoghue is a professional illustrator from Ireland who specialises in archaeological and heritage illustration. He has worked previously for clients such as the NRA, county councils and the Waterford Museum, among others. We are very grateful for his contribution.