Wall walk - A walk way high up on a wall, usually a bawn, and is used for defence purposes. 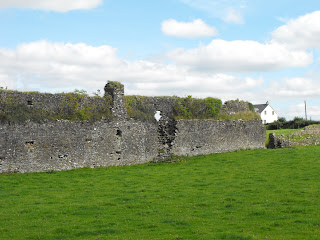 
Ward - A ward functions in the same way  as a Bailey in that it is a courtyard area enclosed by a curtain wall.

Wayside Cross - A high cross that is not in an ecclesiastical site but rather on the side of a road.


Wedge tomb – The most numerous megalithic tomb type in Ireland with over 530 examples known.  They are built within cairns and usually consist of a short front chamber and a longer main chamber which will increase in width and height toward its western end.

Wheeled Cross - A form of high cross noted for it's wheel shaped head.