Description and History – This ruined church is in a very poor state in one of the worst kept graveyards that I have visited.  This is very unfortunate since some of the graves are still visited and it must be upsetting for the relatives to have to battle the undergrowth to get to the grave of their loved one.  I visited this site in November and it was all but impenetrable so in the height of summer it must be a nightmare.  The church is in a poor condition but there was probably more to see under the brambles.  I couldn’t even get into the church to see. The foundation of W gable is exposed and consists of some massive boulders.  The nave and chancel was divided by a pointed arch which collapsed in the 1940’s – luckily the E gable is still standing to a height of about 4m.  The church would have been about 17m in length and 7m wide. A standing stone can be seen in the field to the N – which I will get to on another visit as the field was too flooded that day.

Difficulty – Easy to find and has a small lay-by for parking.  There is a memorial to people who died in the 1798 rebellion there and steps leading to the graveyard.  Effort, at some point in time, was put into this site but it has clearly not been kept up which is sad.

Nearby sites:
There are two standing stones to the N which I have yet to visit.
Aghade, Cloch an Phoill, holed stone
Aghade, bullaun stone
Craans, standing stone (forthcoming) 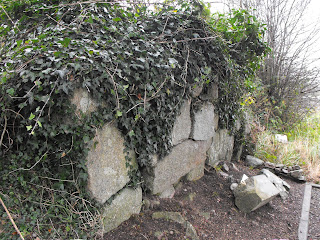 The state of the graveyard even after the growth has died down is appalling. 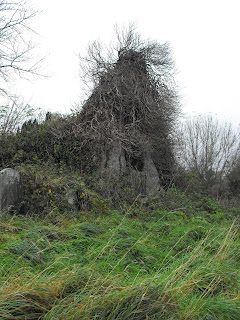 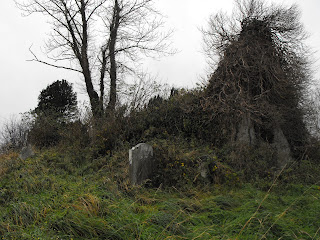 The church is barely visible underneath the ivy.