Location – OS: S 754 768 just S of the R726 and is visible from the road.
Longitude: 6° 52' 51.64" W
Latitude: 52° 50' 12.93" N
GPS: S 75454 76839 (Elevation: 93m - Accuracy: 6m)
Description and History – Believe it or not the recent visit to this portal dolmen was my first. It has taken me years to finally make the trip to Carlow to see this site and it was worth the wait and if I saw nothing else that day I would have been very happy. From the car park the dolmen is perched just below the horizon and even from a distance you are immediately taken aback by its sheer size. The capstone, reckoned to be the largest in Europe, weighs an estimated 150 tons and is 2m thick, 6.1m long and 4.7m wide. Two portal stones (roughly 2m high – it is possible to stand up underneath the dolmen) and a door stone holds up the massive capstone at one end while a prostrate stone (which was once possible standing) sits at the other. The side stones of the chamber are now missing but a standing stone which flanks the N portal stone may represent the remains of a former façade. No traces of the cairn remain. Although in Kernanstown this tomb is often referred to as Browne’s Hill after the former owners of the land.
Although tempting, I would recommend that you resist the temptation to climb on it. It seems to be a popular pastime to have a picture taken while standing or sat on the capstone. Now while it is impossible to damage this site by climbing on it, it will, nevertheless, along with the thousands of other people who climb on it, erode the stone over time bit by bit. I’m a huge fan of the look but don’t touch philosophy.
Difficulty – Easy to find and even has a car-park. There is a paved path up to the dolmen which makes it very accessible to everybody. There’s no fence hopping here! 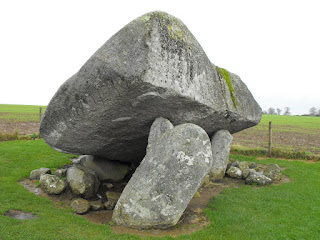 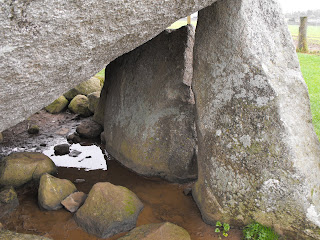 One of the portal stones and the closing stone. 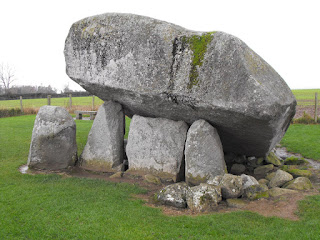 The east face of the dolmen with the two portal stones and the closing stone in the middle.  A standing stone to the left marks the remains of the façade. 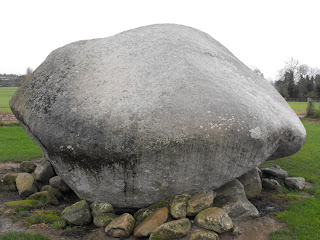 The 150 ton capstone from the rear. 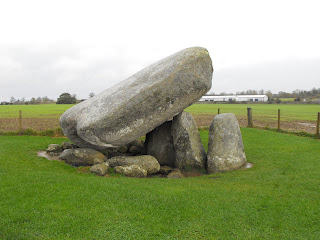 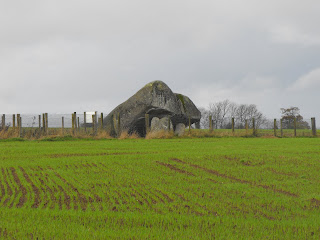 As seen from the path as you approach. As seen from the car-park.